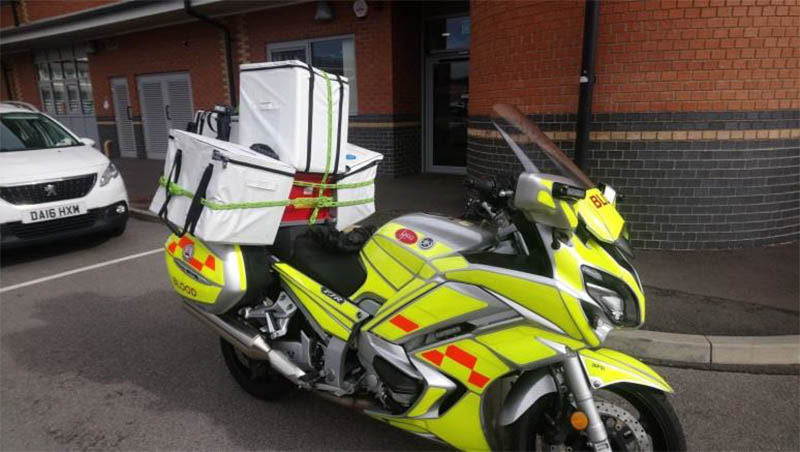 As the end of our busiest year yet is approaching it felt like a good time to write to thank all at the Higgi team once again. Vampire 8 remains our most used machine, currently completing 18,200 miles since becoming part of the Merseyside and Cheshire blood bikes.
As mentioned on previous reports Ireland is still one of our regular clients at the moment needing at least 2 milk runs a week being transported over on the ferry. We received a report from the wonderful milk bank this week, explaining that we have now completed 50 trips across the Irish sea with donor milk.

But as I’m sure you can imagine the milk bank jobs are ones that we all hold close to our hearts. Vampire 8 has played a huge role in helping us to transport the donor milk, and I have supplied a photograph of it outside the human milk bank in Chester ready to depart off to the ferry with a huge load of donor milk.

Since Merseyside and Cheshire blood bikes have supporting the important work of the milk bank in Chester there has been a huge reduction of ‘failed’ milk. There is a process called pasteurisation which happens between Bromborough labs on the Wirral and the milk bank. Before Merseyside and Cheshire blood bikes stepped in to play a crucial role in transporting this milk there was a 22% failure rate in donor milk products. The failure rate has now reduced to 2%! Again this is an outstanding figure which we are very proud of.

Vampire 8 is located at a prime spot on Merseyside to ensure important time critical calls are answered quickly and effectively. Aintree hospital has been a client of ours for a long time. They have samples called ‘frozen sections’ which are rapid microscopic analysis of a specimen usually during oncology surgeries. The role of Merseyside and Cheshire blood bikes and mostly Vampire 8 during this important surgery is that the operator on call will receive a call from Aintree operating theatres where a patient is in theatre, they explain that they have a frozen section due in x minutes. Vampire 8 is deployed as an urgent call and the rider will sit outside until the sample is handed to him/her. Vampire 8 can depart from Aintree and arrive in Liverpool Royal in 11 minutes. The lab at the Royal will phone the results straight back to theatre at Aintree ensuring that the right treatment or procedure for the patient happens.

I hope that the update on Vampire 8 and its most recent journeys has shown you how grateful we are to have received your very kind donation. Vampire 8 is a huge asset to our fleet and ensures that we really can follow our motto of ‘our next ride could save your life’.

All of the Merseyside and Cheshire blood bikes team would like to take this opportunity to wish you a very Merry Christmas!

Quality and service without compromise

Any cookies that may not be particularly necessary for the website to function and is used specifically to collect user personal data via analytics, ads, other embedded contents are termed as non-necessary cookies. It is mandatory to procure user consent prior to running these cookies on your website.